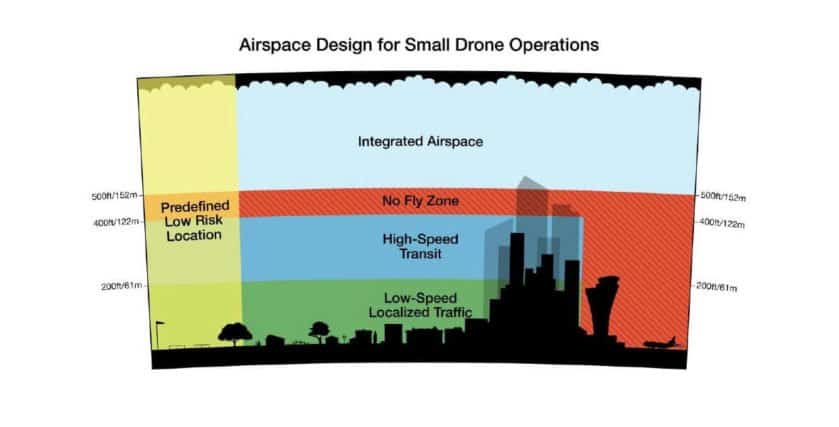 Amazon Prime Air’s Gur Kimchi addressed a packed house at AUVSI’s Xponential Conference in New Orleans on May 3, 2016, as they promoted their concept for drone integration into the national airspace.

“Airspace is a shared resource – this is really important.  Once you take off and fly, you are sharing the air,” says Kimchi. “What’s important is to have a model that is heterogeneous… that enables all applications.”

Amazon’s plan to integrate high- and low-altitude airspace is both simple in concept and ambitious in implementation.  The company proposed an organized, layered structure of airspace combined with a system of “federated” traffic controllers to allow aircraft of all types to communicate with controllers and each other. The concept would give a regulatory authority—the Federal Aviation Administration in the case of the U.S.—overarching control of the system.

Kimchi says that this communications model already exists.  “The technology is there,” he points out, saying that NASA is addressing a federated model with the multi-site test performed recently.  The system seems to incorporate every possibility, including emergencies and unintended conflicts between drone flights; drones accidentally coming into range of one another will communicate and “de-conflict.”

The proposal would create restricted airspace for drone operations below 400 feet. From 200 feet to 400 feet would be a “high-speed transit zone” for more sophisticated, commercial drones, with a low-speed zone below that for localized traffic and lesser capable vehicles. The airspace between 400 feet and 500 feet would be a no-fly zone to effectively separate manned and unmanned traffic.

When asked what it will take to prove that drones can be safely integrated to the public?  “If you fly commercial and the weather is bad, there is a problem, and there is no visibility, who is really flying the plane?  We trust automation every day in other ways – we have to prove that drones are just as safe…over time, we’ll get there.”