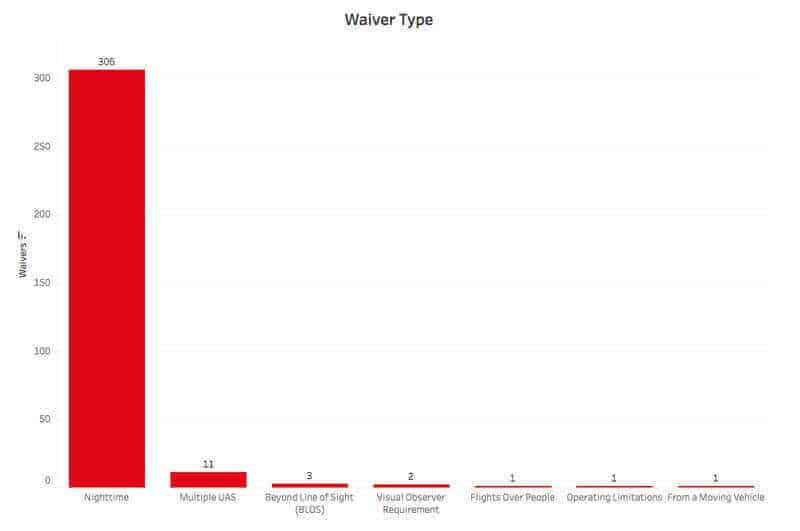 ARLINGTON, Va. – The Association for Unmanned Vehicle Systems International (AUVSI) today released a report that finds nearly 90 percent of the waivers granted by the Federal Aviation Administration (FAA) under Part 107 went to small businesses. According to the report, most of the waivers allow businesses to operate unmanned aircraft systems (UAS) at night, which is not permitted under the current rule. The report also finds that businesses in 44 states received waivers in the first six months since the rule took effect.

“Whether inspecting infrastructure or surveying crop yields, there is clear evidence that America’s small businesses are leading the way in embracing the capabilities and benefits of UAS,” said Brian Wynne, president, and CEO of AUVSI. “At the same time, UAS regulations can, and should, allow for more expanded operations, such as operations at night or beyond line of sight. This would open up a whole new world for UAS that may one day include package delivery and internet services.”

Part 107, also known as the small UAS rule, went into effect on August 29, 2016, creating a uniform regulatory framework for civil and commercial UAS operations. Among the rule’s requirements, operators must fly below 400 feet, within visual line of sight and during daylight hours. Additionally, Part 107 established a waiver process to allow businesses to request the FAA to allow them to fly outside the permitted operating standards if they demonstrate it can be done safely.

So far, the FAA has granted 314 waivers for commercial UAS operators to fly outside the parameters of Part 107. In addition to nighttime operations, the FAA has granted waivers to fly beyond line of sight, use multiple UAS at a single time and conduct flights over people. The most popular UAS application for the waivers is for aerial photography, representing 84 percent of the granted waivers; followed by real estate (58 percent), aerial inspection (58 percent), construction (52 percent) and infrastructure (51 percent).

“The industry projects to create more than 100,000 jobs and provide more than $82 billion in economic impact once UAS are fully integrated into the airspace. With an expanded regulatory environment, there’s no question these numbers could go even higher,” Wynne said. “But this can only happen if the government puts in place a true, holistic plan for full UAS integration that allows for nighttime operations as well as flights over people, beyond line of sight operations, access to higher altitudes and platforms above 55 pounds. By allowing these expanded operations, UAS stand to have an even bigger economic impact.”

The complete analysis can be found here.

Do you need to request a Part 107 or 333 Exemption Waiver for your business? Sign Up for a consultation today and we can assist you with the process. Sign up here for Part 107 Waiver & 333 Exemptions.